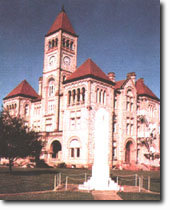 Cuero is a classic Texas town, proud of its history, proud to share that legacy, and proud to be progressive as it looks to the future.

Wide streets with stately oak trees shading the picturesque homes and buildings reflect the period of colorful Texas history beginning when the first settlers chose the area in the mid 1800's. The charming mixture of old and modern attracts visitors to tours, reunions and other special events all year 'round.

As Cuero became known for its great turkey industry around the turn of the century, the city was rocketed to national prominence and began celebrating the famous Turkey Trot festivals. Now, in memory of those days, it has been celebrated as Turkeyfest and will observe its 30th anniversary the second week in October, 2002.